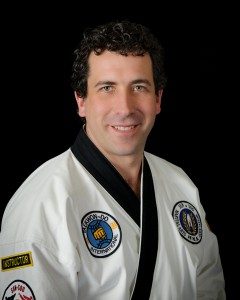 MASTER MICHAEL DICKINSON is a 4th Degree Black Belt in Traditional Tae Kwon Do having begun his practice in 2007. One of Asheville Sun Soo’s early students, Master Dickinson holds the distinction of being the first to have been promoted by Grandmaster Morris to 1st Degree Black Belt within the school, in 2010. Identified as possessing uniquely impactful qualities including an uncommon work ethic, high skill level, natural teaching ability and dedication to his fellow students, in 2011 Master Dickinson was invited by Grandmaster Morris to become co-owner of Asheville Sun Soo Martial Arts.

Master Dickinson trains with Grandmaster Morris three times per week and was promoted to 4th degree Black Belt in August of 2016. He has complemented his Tae Kwon Do practice with substantial training in Hapkido, Boxing, Judo and Jiujitsu, which is reflected in his comprehensive knowledge and his instruction to his students. As a practitioner, Master Dickinson has placed first in forms, sparring, and board-breaking in numerous tournament competitions, including at the national level. As a teacher and mentor, Master Dickinson is appreciated for his consistency, physical power, kind heart, and commitment to continually reaching new heights and helping his students do the same.

Master Dickinson’s role at Asheville Sun Soo is supported by his wide range of experiences both personally and professionally. He is a husband, father, friend to many, long-time athlete, and self-taught musician. His professional education includes a B.A. in Psychology and Early Childhood Development. His athletic career includes football and wrestling at the university level.  His professional career includes several years as a successful general contractor, building a variety of residential and commercial projects. Master Dickinson’s musical pursuits include hundreds of public performances.

Master Dickinson believes that, “As soon as you believe in the label that is put on you, you limit yourself.  At Asheville Sun Soo, we hold a space for you to overcome those labels and realize your limitless self.”

START YOUR PRACTICE
Scroll to top