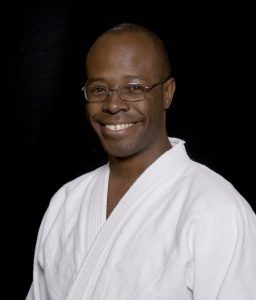 Professor Thabiti Sabahive began his study of Danzan Ryu Jujitsu in 1984 at the age of 11 at the Westside Family YMCA Dojo in LA.  A student of Professor William G. Randle since 1994, Professor Sabahive is currently a 6th Degree Black Belt in Dan Zan Ryu Jujitsu, and holds the additional titles of Senior Instructor with the American Judo and Jujitsu Federation, Chief Instructor with the ShuriTe Bujutsu Kai, and a Kaidensho (Certificate of Full Transmission), with the title of Kyoshi, from the Kodenkan Danzan Ryu Jujitsu Association.

Danzan Ryu Jujitsu is a style of traditional jujitsu that focuses on methods of throwing, and controlling an opponent by using by using their own energy against them.   Master Sabahive complements his study of Dan Zan Ryu with additional training with high level instructors across other martial arts, including various systems of Jujitsu, Karate, Tae Kwon Do, Kempo, Kung Fu and weapons.

As a student of Danzan Ryu Jujitsu, Master Sabahive is extremely accomplished physically and constantly seeks to refine his advanced technical skill.  As an instructor, he teaches with an exceptional emphasis on safety and realism.  His instruction is clear and detail oriented and he provides patient instruction to students of all ages and skill levels. His dedication to the art and to being in a state of contribution is apparent through the regular time he spends on the mat, providing his help and expertise to all of his students.

Master Sabahive’s education background includes majoring in Physics at the University of Hawaii in Hilo.  He is also a graduate of Module 2 from the Danzan Ryu Seifukujistu Institute, which includes a body work certification and other healing arts expertise.

As the Resident Head Instructor of Dan Zan Ryu Jujitsu, Master Sabahive has the additional distinction of being the Director of Sun Soo’s After School Program.  Master Sabahive has 8 years of experience directing YMCA afterschool and camp programs in his hometown of Los Angeles.   The Asheville Sun Soo after school program operates Monday through Friday, from school pick up time until 6 pm, and includes high level tutoring, snacks, games, and outdoor time.   The after school program also operates all day during snow days and teacher work days.  Master Sabahive is excited to support the academic, social, and character development of the kids in the Asheville Sun Soo afterschool program this fall.

Master Sabahive believes that people benefit from a martial arts practice because “you have a concrete and tangible way to change an aspect of how you exist in the world.  By changing how your body moves, you by necessity change how your mind interacts with your body.  By controlling your body, you gain access to a method which shapes your emotions and thought processes.  There are no superior martial arts, only superior martial artists.”