Once again, Asheville Sun Soo Martial Arts took a contingent of students to the annual TKDI Invitational Tournament, known as the “US Masters Invitational Taekwon-do” Championship. This event was hosted by Glen Ridge Taekwondo, which is owned and operated by Master John Meany and Master Laura Giletti.

Asheville Sun Soo would like to congratulate Master Meany and Master Giletti for running an excellent tournament this year. As expected, this year’s tournament was characterized by positive energy, a high degree of professionalism, and an all-around healthy competitive spirit!

Grandmaster Morris is proud of and would like to recognize the students from Asheville Sun Soo who made the trip to NJ to compete. All of them did well, and were a pleasure to have on the trip!

This year’s competitors include: 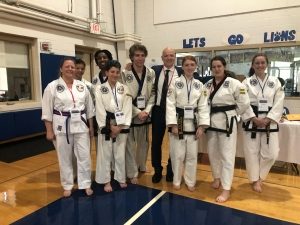 We would like to give special recognition to 2nd Dan Black Belt, Ms. Jennifer Marshall for winning the Forms Grand Championship trophy! This trophy is awarded to the top forms competitor in the Black Belt ranks, which this year included 17 different schools!

Asheville Sun Soo Thanks Christine Priola, Publisher of the Montford &...

Asheville Sun Soo Martial Arts is Proud to be a Recipient of the 2019 Sky High...
Scroll to top