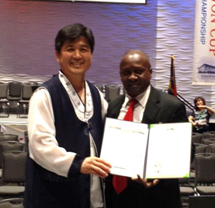 Please join us in welcoming Master Ron Whitted to our August testing event! Master Whitted is president and founder of the North Carolina Taekwondo Organization and has launched an Olympic Taekwondo Development Program in his region.

Master Whitted’s personal motto is “still kickin’,” believing that a committed and consistent practitioner will live a long, happy and healthy life!