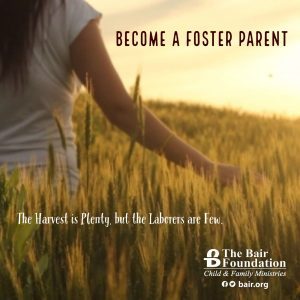 Asheville Sun Soo Martial Arts is excited to welcome The Bair Foundation as the sponsor of our 2018 Annual In-House Tournament and our 2018 April Belt Rank Testing event. We appreciate the work they do in the community and around the country, and are grateful to Rob Edmonson – Asheville Sun Soo practitioner and parent – for facilitating this partnership.

The Bair Foundation is a national non-profit foster care agency with offices located throughout the United States, and was founded by Bill Bair. “Papa Bair” wanted to create an organization to provide quality care and services that restore and empower children, youth and families who are in crisis. The Bair Foundation’s headquarters remain in the small town of New Wilmington, PA where it began in 1967, but has grown and now provides a continuum of care and services with over 30 offices in 9 states across the country; Pennsylvania, Ohio, North & South Carolina, Kentucky, Virginia, Oklahoma, Texas and New Mexico. They provide a variety of services for children facing challenges in their current home situation, including foster care placement, foster-to-adoption placement, kinship care services, family services, behavioral health services, and independent living skills training.

Rob is the Intake Coordinator for the Asheville office. His job includes training new families and matching kids with those families. He loves all parts of the job, but especially enjoys bringing kids to their new foster homes where they have the opportunity to see what an excellent home situation looks like.

Asheville Sun Soo Martial Arts is proud of our commitment to excellence and inclusion. The Bair Foundation seeks families with precisely those values, and hopes that by bringing awareness of the work being done by The Bair Foundation to Asheville Sun Soo families, more interested and eligible households will become a part of the Bair family, and that some of these children might also become members of the Sun Soo family – an experience Rob hopes will provide needed consistency and structure in their lives.

For more information about The Bair Foundation, visit their website at http://bair.org. 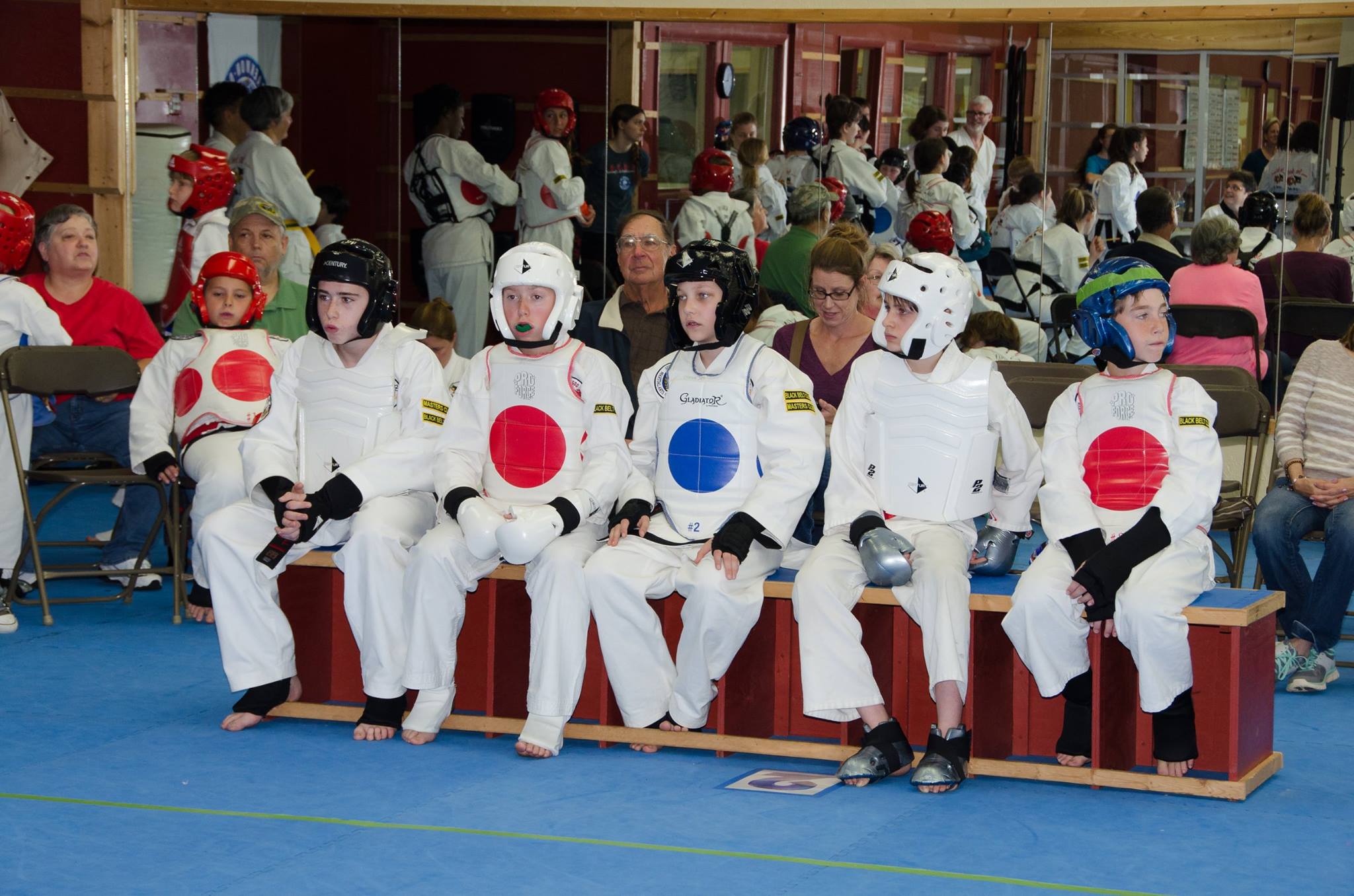 On Saturday, April 7, 2018, Asheville Sun Soo Martial Arts will be holding its annual in-house taekwondo tournament. This event is for all practitioners, regardless of age, rank, or experience level, and is a great opportunity to practice the skills required for belt rank testing!

Students will compete in forms (patterns), sparring/one-steps, and board breaks (blue-red belt and above, Mighty Lions, upper rank Mighty Tigers). The In-House Tournament events will be judged by students in the Black Belt ranks from our school. Competitors will be your fellow practitioners – this event is only open to students from Asheville Sun Soo!

This event is open to the public. Family members of competitors are admitted for free, $5 for general public.

Concessions will be available for purchase!

9:30am – Competition begins, and should be completed by approximately 2pm.

Due to the tournament, we will not hold regularly scheduled classes on Saturday, April 7th. We will resume our regular class schedule on Monday, April 9th. 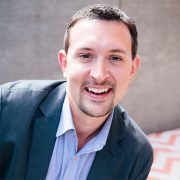 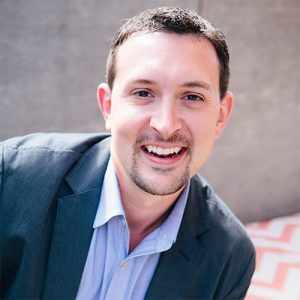 Michael Diettrich-Chastain has had an interest in martial arts since childhood.  As a young boy he studied Tae Kwon Do which sparked his interest in the arts. In high school he studied Aikido.  In January 2007 Michael began studying at Blue Ridge Kung Fu in Boone, NC.  Michael is currently ranked as a 4th degree black belt in Sil Lum Kung Fu. Michael also holds rankings in Emperors Long Fist (Tai Chi, Hsing-I, Ba Kua), Kali Arnis and Tai Yang Tzu Jan Men.  He is currently involved in a private apprenticeship under Grandmaster Rick Ward.

Originally, Michael started training martial arts for the interest in physical development and self-defense. Over the years the martial arts philosophies of discipline, integrity, focus, relaxation, leadership, courage, connection and synergy have become more and more important.  The arts are truly a way of life.  Michael enjoys teaching as it is a way to consistently learn the complexities of the arts as well as nuances of even the simplest of movements. “Teaching allows for us to become better practitioners while at the same time fostering growth in others”, says Michael.  He also says “Teaching gives us the opportunity to truly synthesize our knowledge, test our ability to break down concepts and movement, build patience, work with different learning styles and truly develop our own practice. Teaching is critical for learning. I’m grateful for all opportunity to share knowledge.”

Michael is also the founder of Arc Integrated in Asheville, NC.  Arc Integrated provides assessment, training and professional coaching for individuals and organizations.  Content areas that Arc Integrated focuses on include leadership development, communication and emotional intelligence.  Michael holds a BA in Psychology and Spanish and a MA in Counseling with a concentration in Body/Mind Therapy and is also certified in multiple personality assessment tools.

Michael often incorporates philosophies from martial arts into his work with individuals and organizations. He has facilitated trainings on leadership, stress reduction, communication and conflict resolution while infusing concepts from his martial arts study and background. 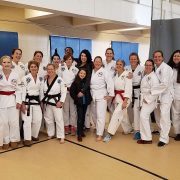 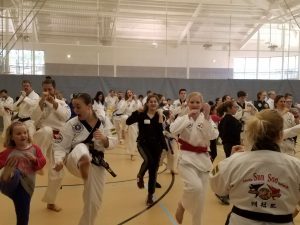 Asheville Sun Soo Martial Arts is thrilled to have done a demonstration and class in support of the local events associated with National Girls and Women in Sports Day!

Created as a means of celebrating the achievements of women and girls in athletics, as well as provide exposure to different types of physical activity, National Girls and Women in Sports Day is celebrated during the first week of February every year. This year’s event was coordinated by the Asheville Parks and Recreation department, and was held at UNC Asheville. 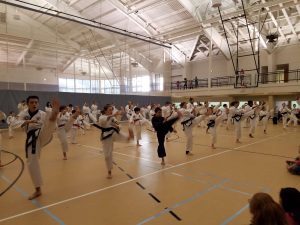 Asheville Sun Soo performed an exciting demonstration, and held a short class that was open to all participants in the events of the day. Many of our female practitioners participated, and event attendees were treated to an inspirational example of what is possible with a martial arts practice!

We are particularly excited about supporting women and girls being involved in sports of all types. Our students had a great deal of fun being a part of this community event, and we look forward to participating in other such events in the future! 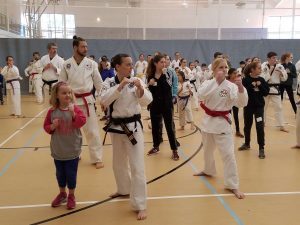 If you are interested in having Asheville Sun Soo Martial Arts do a demonstration or class for your group or event, please contact Master Tony Morris at tkdtonymorris@gmail.com or by phone at 505-4309. 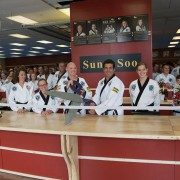 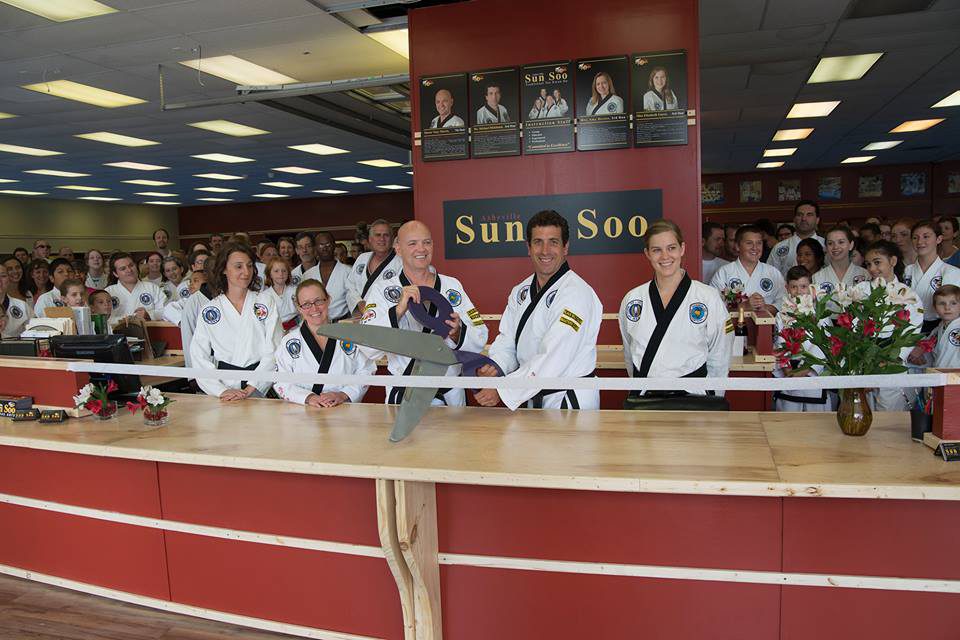 Asheville Sun Soo is excited to celebrate our birthday today! We opened on January 3, 2007 – making it our 11th anniversary!

We want to thank our students and their families for their ongoing support and dedication! 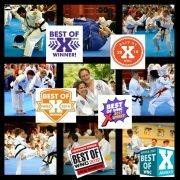 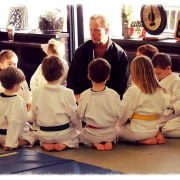 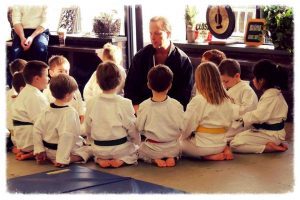 Master John Penn began his martial arts journey in 1986, when he began studying Chung Do Kwan, one of the five primary styles of Traditional Tae Kwon Do. Master Penn started his martial arts practice through the University of Toledo.

After receiving his 1st Degree Black Belt in 1992 in Traditional Tae Kwon Do, he began a martial arts program at the YMCA, which he developed into a full-time program. In 2002, after additional training in complementary martial arts styles, Master Penn opened Satori Martial Arts in its current location in Maumee OH. He is still the primary instructor and is on the mat teaching 7 days a week, including classes in Garamot Arnis, Japanese Jujitsu, Karate, Yoga, and Danzan Ryu healing arts.

Master Penn loves teaching and inspiring people. He is an excellent instructor who has the mission to make each student feel engaged, important, and accomplished. Besides his full-time martial arts and healing arts instruction, he also serves as the State Director for Garamot Arnis.

Master Penn would like to acknowledge all of his instructors:

Please help us to welcome Master Penn by personally introducing yourself and thanking him for his presence. 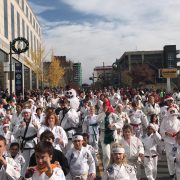 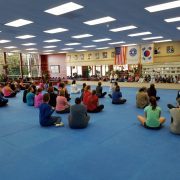 On Saturday November 11, 2017, Asheville Sun Soo held its Autumn Women’s Self Defense Seminar. “We make an effort to have few Women’s Self Defense Seminars each year, as part of our community outreach mission, to make safety awareness and self-defense concepts available to women in our community,” commented Master Tony Morris, Senior Master Instructor.

We want to thank and recognize the nearly 50 participants, who invested an afternoon in themselves and those they care about! We also want to give special thanks for Instructor, Ms. Amy Dexter for doing an excellent job as the lead facilitator, Mrs. Tina Clark, for her excellence as Assistant Facilitator and to the several gentlemen practitioners at Asheville Sun Soo, who volunteered their time to be available in a support role – including playing the role of simulating attackers.

Stay tuned for the announcement of our next Women’s Self Defense Seminar, to be scheduled in the first quarter of 2018. 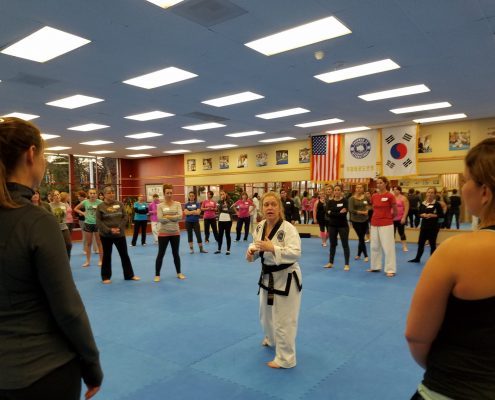 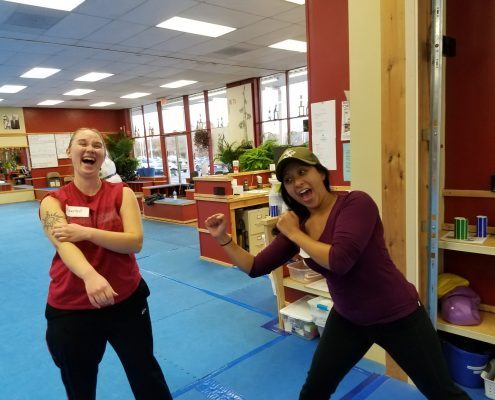 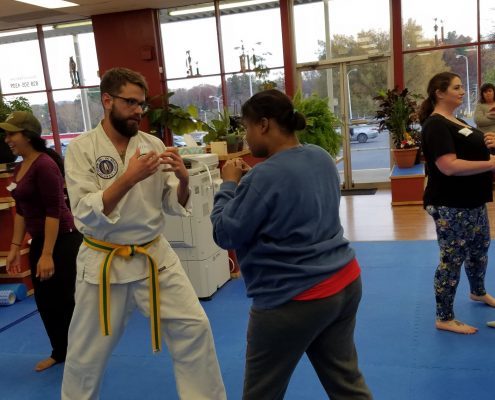 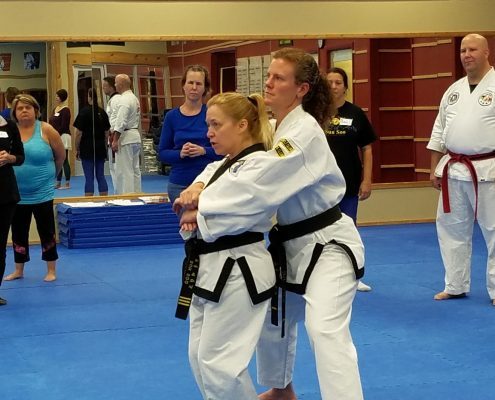 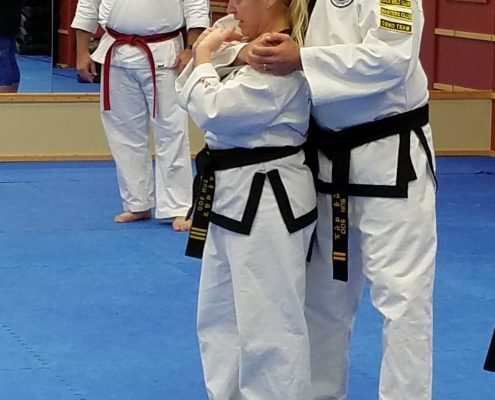 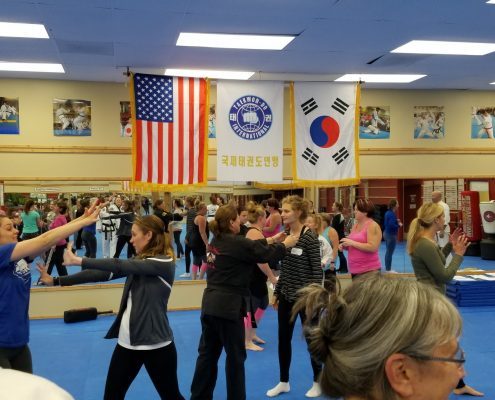 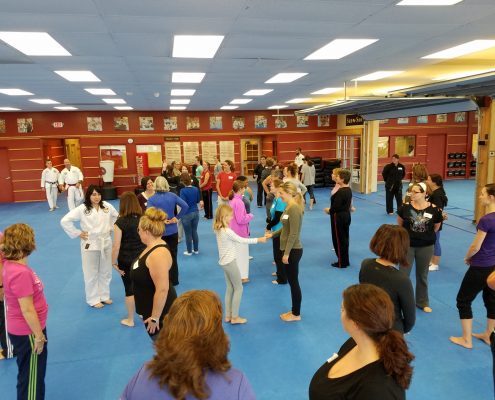 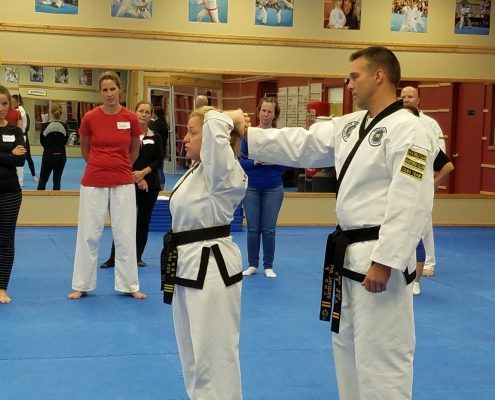 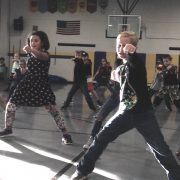 Asheville Sun Soo Martial Arts is proud to have supported Career Day this past Tuesday, October 31st at West Buncombe Elementary School. The purpose of the event was to open the eyes of young students to their possible professional opportunities. Representing Asheville Sun Soo, both Master Michael Dickinson and Ms. Amy Dexter spent the morning helping several classes of young students see bright futures for themselves. During the short 20 minutes they had with each class, Master Dickinson and Ms. Dexter emphasized the importance of three main ideas: 1) – doing well in school and getting a good education – as a foundation for a great professional life; 2) – the importance of goal setting and achievement – as a habit for success; and 3) – the contrast between “excellence” and “mediocrity” as a critical distinction among high-achievers in the professional world. In addition to these primary points, Master Dickinson and Ms. Dexter emphasized the importance and critical roles that teamwork, courtesy and leadership skills play in the work place. They shared with their students the joys of being in a profession that provides so many opportunities to make a difference in the lives of people and the joys of being generous in general. And while 20 minutes is not much time to cover all of that, they even shared a few moves, for an extra dose of fun!! Asheville Sun Soo Martial Arts would like to give a giant shout-out to the faculty and staff of West Buncombe Elementary for all that they do every day to make West Buncombe Elementary and excellent school. And we’d also like to extend a special thanks for letting us be an enthusiastic contribution to this year’s Career Day!

If you, or someone you know, would like Asheville Sun Soo Martial Arts to contribute to other area Career Days, we would love to share our professional experience and optimism with other young students. Please contact Master Tony Morris, Founding Owner/Senior Master Instructor at Asheville Sun Soo Martial Arts. You may contact Master Morris by phone: 828-505-4309 or through the contact option on our website at: martialartsasheville.com 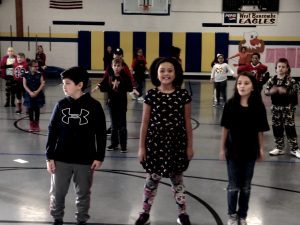 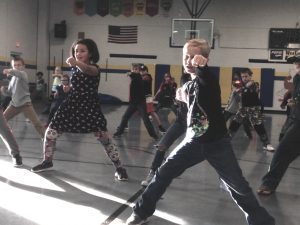