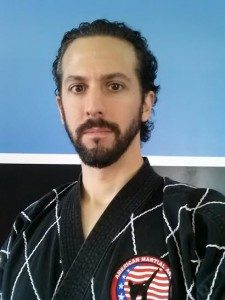 We are excited to announce that Master Dan Bourelle, owner and head instructor of Wilmington Martial Arts and Fitness Center, will be joining us as a guest judge for our testing this December. Master Bourelle holds a 5th degree in Hapkido, a 4th degree in Taekwondo and has been teaching martial arts for over 15 years. In addition to being an accomplished martial arts instructor, he is also a certified personal trainer and certified MMA conditioning coach. It is clear that Master Bourelle is an energetic, passionate and dedicated instructor and we are greatly looking forward to his visit!

Master Bourelle began his martial arts practice when he was 13 in Norfolk, NE, in 1993. His older brother paid for them both to take Hapkido classes as a birthday present. However the Hapkido classes were mainly for older students, so Master Bourelle opted to join Taekwondo classes first in order to “earn” his way into the Hapkido classes, which were primarily taught for law enforcement officials. He has continued to train in both arts, and additionally the sword art of Gumbo, for nearly 20 years.

When asked about his greatest influences, Master Bourelle cites his teacher, Master Fred Roskens, and his teacher, Master Ken Brooks. He says he still leans on their guidance by imagining what they would do if they were in his situation. The ninja turtles and karate kid also played a big role in Master Bourelle’s early interest in martial arts. Additionally, he appreciates Bruce Lee’s influence, because “he brought new ideas and philosophy into martial arts and changed people’s minds and perspective.” Master Bourelle says that he strives to do the same.

Master Bourelle began assist teaching martial arts shortly after earning his 1st dan at the age of 16. He had not planned to be an instructor, but simply felt like he was doing his part to give back as a black belt. He took the role seriously and stepped into the new responsibility – and was soon teaching all of the school’s Hapkido classes. He says that teaching felt natural and that it felt good have a positive area in life where he could help others and be respected by adults.

Part of Master Bourelle’s martial arts path includes creating new highlights and roadmarks for himself constantly. Previous defining moments of his martial arts career include unexpectedly placing 1st in a national tournament, and testing simultaneously for his 4th dan in Hapkido and his 3rd dan in Taekwondo. Finally, he describes opening and running his own martial arts school as one of the biggest accomplishments of all –
“After numerous years working for Architecture/Engineering Firm, I lost my job during the recession and decided to open my martial arts school full time. I thought for sure I was going to lose everything I owned to keep the doors open…the first thing I bought for the studio was a couch to sleep on, as I thought I would lose my house. Luckily, my house survived, and so did I, and so did my school! That couch still sits in my office at the school and reminds me that when you want something bad enough, nothing will stop you.” 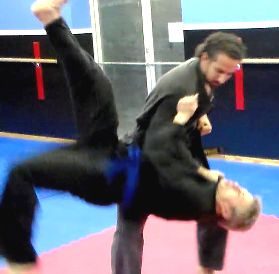 is clearly passionate about both practicing and teaching martial arts. He used to love competing when he was younger, but says that now his practice has evolved to have a deeper emphasis on self-defense, culture, and the forms. He says “I love Taekwondo because there are so many layers that I am still discovering after 20+ years of training.” His favorite element of teaching is seeing students push the limits of what they thought they could do, and then seeing them realize that those limits don’t actually exist! That moment, he says, is when he knows that someone’s life just changed for the better in a big way.

Master Bourelle’s other hobbies include baseball and softball, sand volleyball, music, and guitar playing. He also loves visual arts, and although he doesn’t paint, draw or sculpt often anymore, that passion for art still exists in him and continues to manifest in different ways.

This will be Master Bourelle’s first visit to Asheville Sun Soo. His teacher’s teacher trained under Grandmaster S.J. Kim, who is the founder and president of Taekwon-do International. He is excited to visit a new school and is going to be doing some filming at Sun Soo for part of a documentary. He says that he has learned something new from every school that he’s visited and is excited to see what will be unique about his visit to Asheville. Master Bourelle’s advice to testing students is this – “own it! Which means, accept your current skill level, give it your all, and apply the techniques so that they work for you!” He also added the following – “For those black belts testing, I’m going to pass along one of the best pieces of advice I was given about being a black belt. Good black belts do what they are told quickly and efficiently. Great black belts get it done without being told.”

Thank you Master Bourelle for visiting us and we are very excited to meet you and to share with you!